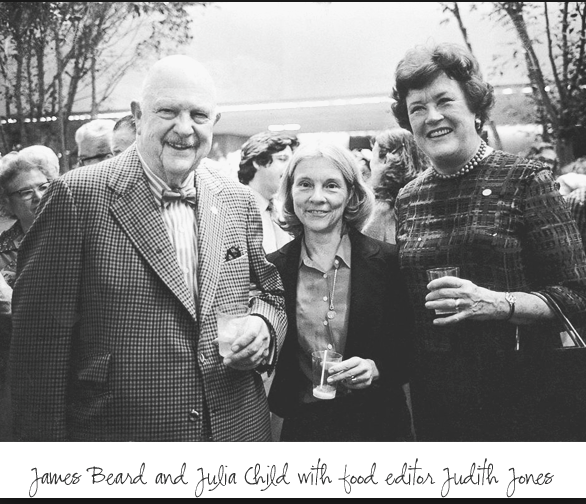 FOODIES IN FRANCE LED ME TO THE KITCHEN

Before there was foam, fusion and The Food Network there was France. Though according to the Italians France was not the birthplace of fine food, it was where it truly sprang to life.

France was the original farm to table. It still is. They just don’t announce it. They would find that odd.

It was where the great chefs worked and created. And it was where the first crop of “foodie” Americans migrated, met, meditated and marinated about all things that involved French food.

Luke Barr’s lively, informative and tasty book Provence 1970, focuses on the five Americans who changed the way America ate, cooked and thought about food in the seventies and eighties.

In the winter of 1970 an iconic group of Franco-foodohphiles gathered in Provence. For over a month James Beard, Julia Child, Richard Olney, MFK Fisher and the editor Judith Jones ate, argued with and cooked for each other. All the while grappling with their individual relationships to food, to France, and to how they would go forth in their own careers.

I’m not going to tell you anymore as if you care about food, France and any of those people you will want to read the book.

Provence 1970 not only entertained and informed me, it reawakened my own rather dormant relationship to cooking and eating.

The 70’s was when I was in the peak of my true foodie days. I cut my culinary teeth on Richard Olney’s book Simple French Food; which should really be called, “Less Complicated Than Usual French Food” as nothing Olney does is ever simple.

I devoured all the writings of MFK Fisher, who was by far the most cerebral of the group.

I was blessed to have known Julia Child and there is no question she was the first true media food star. This many decades later her reputation only seems to grow. James Beard was and remains a legend in food circles

Luke’s book so transported me back to my original feelings about food and my fascination with these people it sent me right to the kitchen. So last week we gave a dinner for Luke and his wife, architect Yumi Moriwaki and one of America’s high priestesses of food, Food52’s Amanda Hessser, her husband New Yorker writer Tad Friend, and several others I won’t mention as I don’t want a bunch of emails asking why people were not included.

Our dining room only holds eight comfortably, so eight it was.

One of the things that surprised me in the book was when they all ate together there were not a lot of courses. The entrée was the centerpiece. The first course was stuck in the middle of the table at the same time everything else came out; unless it was soup.

So, in light of that I kept it simple -Three dishes and a dessert.

I decided to represent as many of the characters as I could by cooking one of their recipes or something they might have made.

MFK Fisher was not a great chef. She didn’t care about the construction of food as much as she cared about the history of it and the sensual experience it provided. When people came over she would cook things in advance so she could enjoy her guests and drinks on her porch.  She tended to go out to her garden, pick something fresh and prepare it in the simplest of ways.

So in honor of MFK (who happens to be Luke’s great aunt) I served haricots verts vinaigrette. I threw it together myself. I tossed some caramelized shallots on the top, not all organized, or perfect, casually, the way I imagine MFK would have done it.

Olney was the most complex of these cooks in every way. His recipes take the most time. So I chose his Chicken Gratin as the entrée. Now I don’t have a photo of this, as my brother -in-law sent over some wonderful wines to pair with the meal.   Anyway, by the time I served the chicken I had drunk enough to forget to photograph it.

I cannot describe to you how much butter, cream and cheese went into this dish. I will say that Julia once said to me, and I’m not saying this to sound obnoxious, she happened to say it – “Tracey, there is no point in cooking at all if you don’t use loads of butter and cream.”

In honor of Julia I made her Braised Rice With Chicken Stock. Perfect and easy, with over four tablespoons of butter.

When this idiosyncratic group gathered and ate, the main course was so intense, they tended to have very simple desserts, such as  fresh fruits or sorbets.

I wanted to use one of Amanda’s recipes from Food52.  She recently posted a recipe for Brown Butter Raspberries. She describes it as “raspberry pie without the crust.”  It is  quite amazing and I think I will be making it all summer.

Thanks to Luke and his book my inner chef is itching to cook more.

I was egged on by an email from Amanda the next day  who praised  my kitchenly skills.  Since my family runs to the takeout menus when I reach for a saucepan it made me feel good.

In the next few weeks I am going to remake the chicken, take photos and include the recipe. Maybe I forgot to photograph it on purpose so I have an excuse to make it again.