I have a good friend who is as bossy and opinionated as I am. Sometimes she tells me what do to and usually do it right away. So the other day when she emailed me in Paris and said "You have to contact Richard Nahem you won't regret it, I did...and I don't.

I have a very bossy friend named Lizanne, she is in fact as bossy as I am. This is quite an accomplishment as I’m pretty damn bossy. But the amazing thing is we get along  really well. I think one of the secrets to our friendship is not only do we boss each other around, but at times we actually do something neither of us is terribly good at ~ we take advice from the other. She speaks as quickly as I do, she is very loyal and you always know where you stand with her, we share these qualities, we are fierce mama lions when it comes to our kids,  and we  gravitate to many of the same things.

So the other day when I was in Paris and I got an email that said, “You have to call Richard Nahem, he gives the best tours in Paris, I know, I know, you know the city , I thought I did too, but trust me on this.”  I’m paraphrasing a bit but that is the gist of it. She knew off the bat I would respond with I’ve been coming here since I was nine I don’t need a tour. She beat me to it.

So of course the next thing I did was email Richard Nahem.   Richard has a company and blog called EyePreferParis.   One of his specialities is the Marais. Now, I have been to the Marais many times, and I almost always get lost. I can find my way to the Picasso Museum and  several stores ~ if I have the address.  But I usually end up walking in circles. I have heard for years that there are wonderful old homes, palaces really behind gates. I know its’s the oldest section in Paris and I’m old enough to remember when it was sort of a dump, before it became the hippest part of town. But since it has become the center of all sorts of things, I have never really seen most of them.

So, I  booked three hours the next day to have Richard show Lucy and me the Marais, Now I ONLY did this based on Lizanne. I truly hate tours, I hate those guides who don’t shut up. I hate it when you are bored and they won’t let you go to the gift shop or move on. I hate being hearded and treated like a tourist. I would much prefer being dropped off with an inconspicuous travel book and get lost: Which is normally what we do. But Lizanne said “Richard is like having your good friend take you around.” I trusted her, I believed her and she was right.

But the sort of amazing thing is, she had told him about my reading and he was there in the front row that night. I was very touched and I liked him right away.

So the next day, Lucy and I had no trouble finding him at the St. Paul Metro stop.  He greeted us with a kiss on each cheek, an adorable EIffel Tower key chain and off we went. And boy was Lizanne right; first off you instantly feel like you have known him forever and he doesn’t make you feel lame and out of place like most tour guides. His attitude is let me share with you what I love, let me take you to some of my favorite spots, from palaces behind hidden gates, to handmade paper stores you would never find, to the best pastries in the Marias, to the Jewish quarter, places I had heard about and tried to find but was never able to and  if I by chance I did get there I didn’t know what I was looking at. He explains it all, no, he shares it.

So now not only have I made a friend but for the first time I have actually seen and experienced the Marais.

Richard also does a blog called EyePreferParis which I have started getting and adoring, as each day it gives you a little tidbit from the city he loves. Thank you Lizanne for being you and telling me what to do and thank you Richard for being you and showing us the Paris you cherish  and know so well.

BTW – Richard has a great mid-life reinvention story so be looking for him on 50@50 soon! 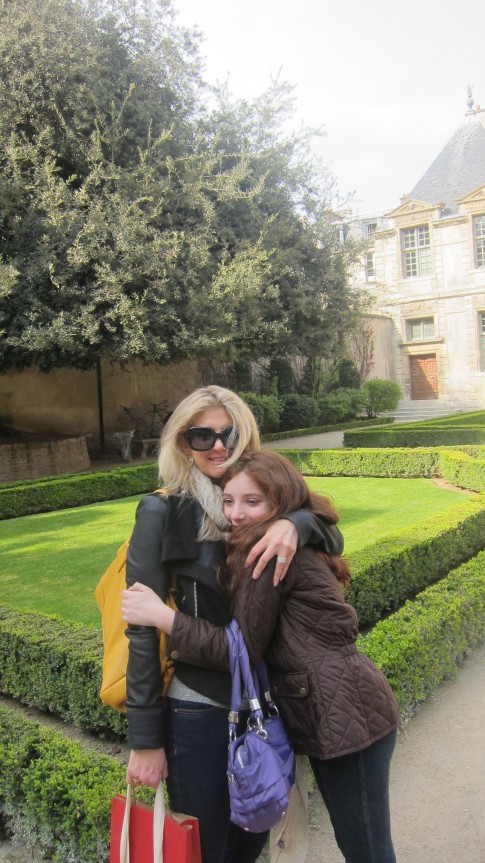 Near Richard’s house there is a small butcher shop that roasts chickens. They pile the onions and potatoes in the bottom and the grease drips down. Lucy and I stood and stared and smelled these when Richard had to run upstairs and get his camera. We wanted to buy one and devour it on the spot, despite the fact it was three in the afternoon. Lucy said if we lived there we would eat this every night. I think she’s right.

It was a great time seeing Richard’s Paris.